In a reflection of high appreciation of theatrical art, Boris and Ināra Teterev Foundation supported Mikhail Chekhov Riga Russian Theatre. Under the auspices of this collaboration, 10 plays have been produced.

Between 2010 and 2019, almost a quarter of all the audience of Mikhail Chekhov Riga Russian Theater enjoyed productions created with the support of Boris and Ināra Teterev Foundation. Almost 230’000 theater fans saw these plays. We invite you to look at the INFOGRAPHICS about the co-operation of the theater and the foundation (results by 31.12.2019). 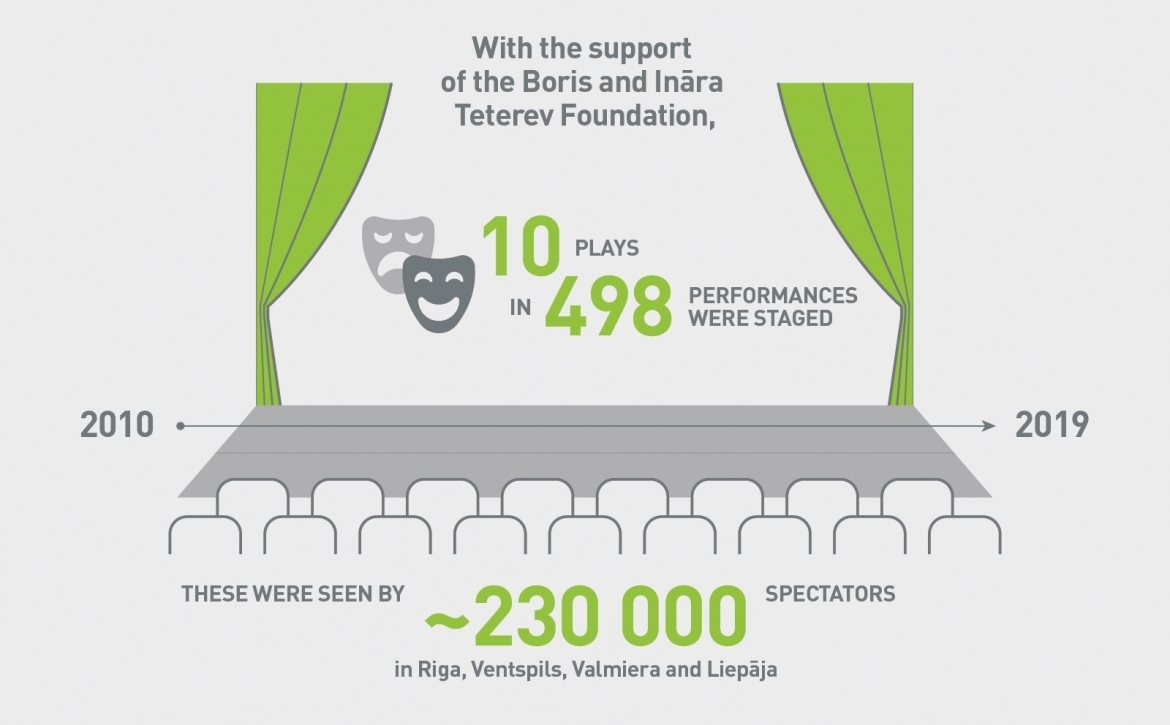 7 of 10 plays are still in the repertory of the theatre: www.mct.lv/en

In 2010, the support has been provided for a production of William Shakespeare’s play “Twelfth night” and a play celebrating the music of the legendary Oscar Strok, “Tango with Oscar Strok” (in 2012). The latter production has proved to be a tremendous hit with both Latvian and Russian audiences and is usually sold out.

In 2013, the Foundation and Mikhail Chekhov Riga Russian Theatre agreed on the provision of regular support for a range of new productions. On 11 May 2013, viewers had the chance to enjoy the first production under the auspices of this agreement: the operetta “Suitors”, which was followed by “The master's comedian”. And during the 2014/2015 season, “Khanuma”, followed by "The Ghost from Canterville" (2016) dedicated to the jubilee of Maestro Raimonds Pauls (Aleksey Scherbak adapted this musical from the motifs of the famous Irish writer Oscar Wilde’s story “The Canterville Ghost”).

In 2016, two more plays were supported by the Boris and Ināra Teterev Foundation - "Medea" by Vladislav Nastavshev with Guna Zariņa as Medea; and "To Love" by Alla Sigalova. In 2017, the "flight from Paradise, in two parts", i.e. "King Lear" by W.Shakespeare, is staged by Viestur Kairish.

In 2018, in its turn, the play "The keys to magic" was created. It is dedicated to the centenary of the Latvian State, and became already 10th play of the Mikhail Chekhov Riga Russian Theatre supported by the Boris and Ināra Teterev Foundation.