On 5 September 2013, as part of the 150th anniversary celebrations of the Latvian National Opera and Ballet Theatre building, a monument was unveiled in honour of the great Rigan and ballet dancer Māris Rūdolfs Liepa (1936 – 1989).

The monument is a gift from the philanthropists Boris and Ināra Teterev to the City of Riga and can be found on the edge of the canal next to the bridge between the Opera House and the University of Latvia. 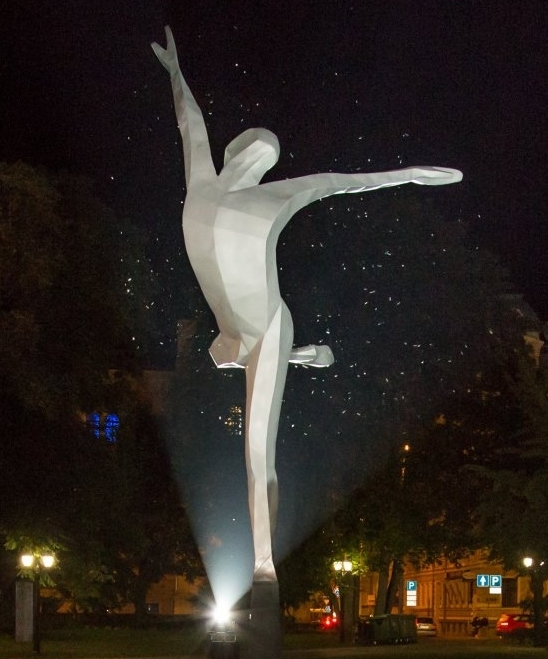 This monument is dedicated to ballet, using the globally renowned ballet dancer Māris Rūdolfs Liepa’s unforgettable stance in the classical attitude pose. Estonian artists spent almost two years creating this sculpture. In terms of its size and technological complexity, it is the most important outdoor work of art since Latvia regained her independence. The five metre high sculpture is made from stainless steel and is erected on a granite pedestal. The shadowy colouring is in contrast to the dancer’s stance, its patina has been created using the sculptors’ original technology, which the Estonians have kept a secret,” explains curator Helēna Demakova.

Following an invitation from curator Helēna Demakova, the monument was created by Estonian artists Jaan Toomik and Jiri Ojaver, who are professors at the Art Academy of Estonia, who have represented their country at the Venice Biennale, while of all the artists in the Baltic States, Jaan Toomik is received the greatest international recognition and renown. The monument’s architects are Peter Pere (Estonia) and Juris Gertmanis (Latvia).

An agreement regarding the creation of this monument was concluded on 24 August 2010 with the signing of a memorandum of intent. This was signed by the philanthropists Boris and Ināra Teterev, representatives of Riga Council and the Latvian Ministry of Culture, and the great ballet dancer’s son, the Head of the Māris Liepa Charitable Foundation, Andris Liepa.